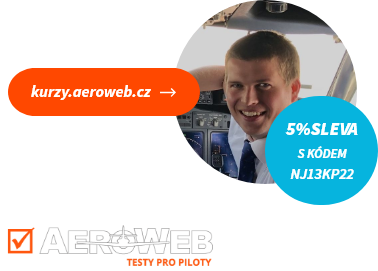 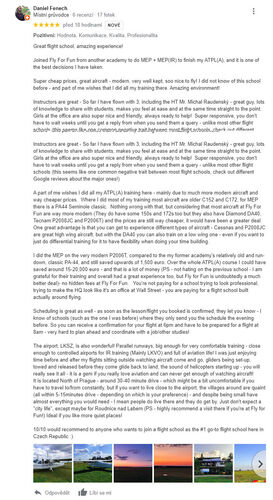 Joined Fly For Fun from another academy to do MEP + MEP(IR) to finish my ATPL(A), and it is one of the best decisions I have taken.

Super cheap prices, great aircraft - modern, very well kept, soo nice to fly! I did not know of this school before - and part of me wishes that I did all my training there. Amazing environment!

Instructors are great - So far I have flown with 3, including the HT Mr. Michal Raudenský - great guy, lots of knowledge to share with students, makes you feel at ease and at the same time straight to the point.

Girls at the office are also super nice and friendly, always ready to help!  Super responsive, you don't have to wait weeks until you get a reply from when you send them a query - unlike most other flight schools (this seems like one common negative trait between most flight schools, check out different Google reviews about the major ones!)

A part of me wishes I did all my ATPL(A) training here - mainly due to much more modern aircraft and way cheaper prices.  Where I did most of my training most aircraft are older C152 and C172, for MEP there is a PA44 Seminole classic.  Nothing wrong with that, but considering that most aircraft at Fly For Fun are way more modern (They do have some 150s and 172s too but they also have Diamond DA40, Tecnam P2008JC and P2006T) and the prices are still way cheaper, it would have been a greater deal.  One great advantage is that you can get to experience different types of aircraft - Cessnas and P2008JC are great high wing aircraft, but with the DA40 you can also train on a low wing one - even if you want to just do differential training for it to have flexibility when doing your time building.

I did the MEP on the very modern P2006T, compared to the my former academy's relatively old and run-down, classic PA-44, and still saved upwards of 1,500 euro. Over the whole ATPL(A) course I could have saved around 15-20,000 euro - and that is a lot of money (PS - not hating on the previous school - I am grateful for their training and overall had a great experience too, but Fly for Fun is undoubtedly a much better deal)- no hidden fees at Fly For Fun.   You're not paying for a school trying to look professional, trying to make the HQ look like it's an office at Wall Street - you are paying for a flight school built actually around flying.

Scheduling is great as well - as soon as the lesson/flight you booked is confirmed, they let you know - I know of schools (such as the one I was before) where they only send you the schedule the evening before. So you can receive a confirmation for your flight at 6pm and have to be prepared for a flight at 8am - very hard to plan ahead and coordinate with a job/other studies!

The airport, LKSZ, is also wonderful! Parallel runways, big enough for very comfortable training - close enough to controlled airports for IR training (Mainly LKVO) and full of aviation life! I was just enjoying time before and after my flights sitting outside watching aircraft come and go, gliders being set-up,  towed and released before they come glide back to land, the sound of helicopters starting up - you will really see it all - it is a gem if you really love aviation and can never get enough of watching aircraft!

It is located North of Prague - around 30-40 minute drive - which might be a bit uncomfortable if you have to travel to/from constantly, but if you want to live close to the airport, the villages around are quaint (all within 5-15minutes drive - depending on which is your preference) - and despite being small have almost everything you would need - I mean people do live there and they do get by. Just don't expect a "city life", except maybe for Roudnice nad Labem (PS - highly recommend a visit there if you're at Fly for Fun!) Ideal if you like more quiet places!